An 18-month-old baby was found in a forest in the Transylvanian region yards from where his mother had fallen and died of exposure to the cold, authorities said Tuesday. 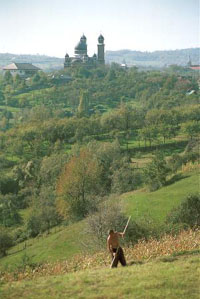 A shepherd discovered the body of a 40-year-old woman on Sunday near the city of Dej in northwest Romania, and called police.

"I saw the body of the woman ... and then I heard a movement and found the baby about 100 meters (yards) away)," said Radu Pascu, a local police officer. "He had taken shelter in the leaves which saved him," he said by telephone.

The toddler, who was found scarcely alive in near freezing temperatures, had probably been in the forest for up to two days, health authorities said. The mother had been walking through the forest to a neighboring village and had been drinking before she died.

The baby, identified as Anton Sigheartau, was taken to the city hospital where he was recovering. His father is a miner and has two teenage children, reports the AP.