South Korea and Cambodia agreed to set up a joint committee to tighten their business and diplomatic ties and to step up cultural and tourism exchanges, South Korea 's presidential office in Seoul said Tuesday. The two countries also agreed to cooperate to ensure South Korea can quickly sign a free trade accord with the 10-country Association of Southeast Asian Nations, the presidential office said on its official Web site about the summit between President Roh Moo-hyun and Cambodian leader Hun Sen. 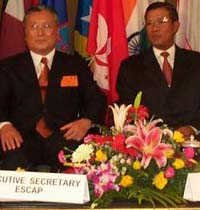 In December, South Korea and Southeast Asia signed a framework trade agreement that called for completing negotiations by the end of 2006, with the ultimate goal of creating a combined market of 548 million people with an economy of more than US$1.4 trillion (1.1 trillion). Roh praised the Cambodian leader for his country's decision to grant preferential tariffs on goods made at a joint North-South Korean industrial zone in North Korea 's city of Kaesong a symbol of growing inter-Korean reconciliation said the presidential office.