Russian President Vladimir Putin held talks Tuesday with his Chinese counterpart, Hu Jintao, at the start of a visit that was expected to focus on plans for a pipeline to carry Siberian oil to China 's booming economy. Details of Putin's meeting with Hu their fifth in a year weren't immediately released, but officials said the two planned to discuss the pipeline and possibly several other business deals, as well as efforts to expand military ties. 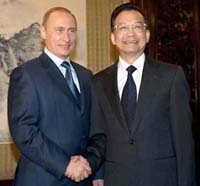 "Moscow-Beijing relations are now at their highest point in their entire history," Sergei Prikhodko, Putin's foreign policy adviser, told the Russian news agency ITAR-Tass. Putin was accompanied by a 90-member delegation of leaders of Russia 's state-owned Rosneft oil company and Gazprom gas monopoly, as well as aircraft, telecommunications and other industries.

Earlier Tuesday, Putin and Chinese Vice Premier Tang Jiaxuan attended the opening of a media center to promote an upcoming Russian cultural year in China . On Wednesday, the Russian leader a black belt in judo was scheduled to visit Shaolin, the Chinese town regarded as the birthplace of the martial art kung fu.

Officials in Moscow and Beijing are looking to spur new investment between the former Cold War-era adversaries and double last year's US$29 billion ( Ђ 24 billion) in trade by 2010.

China is a leading buyer of Russian oil and is the top foreign customer for Moscow 's arms industry. Both Tokyo and Beijing have maneuvered hard for the best routing of the 4,100-kilometer (2,550-mile) East Siberian-Pacific pipeline. For now, China imports all its Russian oil via rail.

China and Russia have moved to deepen political ties following years of Cold War-era suspicion. Both have pledged commitment to a "multipolar world" and last year warned other nations against attempts to dominate global affairs and interfere in sovereign nations' domestic matters.

In an interview with China 's official Xinhua News Agency, Putin gave a veiled warning over U.S. policies to encourage democracy in the former Soviet republics, saying that attempts to "forcibly export democracy and impose cultural standards and values" result in conflicts.

"We do not impose our viewpoints by force, we never 'flex our muscles,' but instead we consistently advocate political and diplomatic approaches to the settlement of conflicts," Putin was quoted as saying. Last week, the U.S. administration released a major foreign policy review that expressed dismay at rollbacks in democratic reform in Russia and warned China against denying personal and political freedoms.

Putin and Hu are also expected to discuss disputes over the Iranian and North Korean nuclear programs. Russia and China , both permanent members of the U.N. Security Council and longtime supporters of Tehran , want a more cautious approach to reining in Iran 's nuclear ambitions. Russia has offered to process uranium for Iran in an attempt to break a stalemate in negotiations.

Russia and China are also participants in six-nation disarmament talks on North Korea 's nuclear programs, along with the United States , Japan and South Korea . Negotiations have stalled due mainly to a dispute over U.S. sanctions against North Korea 's alleged currency counterfeiting and money laundering, reports the AP.