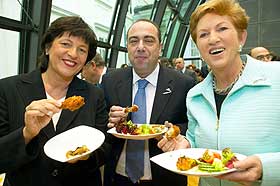 EU Agriculture Commissioner Mariann Fischer Boel said the new rules were "more efficient and fully WTO-compatible." A WTO panel in March ordered the EU to make minor changes after the United States and Australia said the EU broke global trade rules by discriminating against their producers.

The EU insisted the system was always open to foreign products, citing special protection for Colombian coffee, even though the vast majority of the 700 names on the list are European. Under the system, only ham produced using traditional methods near the Italian city of Parma can be called Parma ham, Roquefort cheese must come from its native region in southern France and Madeira wine from the Portuguese island of the same name.

The EU changes will mean that the EU will now drop a requirement that other countries must operate similar protection to gain EU recognition. The EU said in a statement however, that the WTO panel upheld the EU's "geographical indications" system as a whole, rejecting most of the complaints made by the U.S. and Australia, reports the AP.