The H5N1 bird flu virus has killed several chickens in a poultry farming village, indicating that it has spread from central to northern Malaysia, officials said Monday. 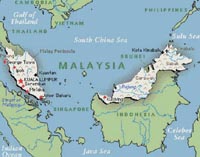 "We're not in a state of panic, but we will take every action to prevent the virus from moving any further," Mustapa told The Associated Press.

It was the first bird flu outbreak in the northern state of Penang, following two cases reported last week in Perak state to the south.

No human infections from the virus have been reported in Malaysia. About 100 people have died worldwide from the disease, which recently spread from Asia to the Middle East, Africa and Europe.

The virus has killed or forced the slaughter of tens of millions of chickens and ducks across Asia since 2003.

In Perak, the virus was detected among chickens in a village and birds in a wildlife ecotourism park. The country's first outbreak this year occurred in February in four villages outside Malaysia's largest city, Kuala Lumpur, in the central part of the country.

Officials have not determined how the virus spread to Permatang Bagak Village, but all the birds that will be slaughtered have been found within 1 kilometer (half a mile) of the site where the chickens died, Mustapa said.

Officials will also declare a 10-kilometer (six-mile) radius observation zone in the area, meaning residents' health will monitored in the zone and the removal of birds will be prevented, reports the AP.