US president George Bush marked the anniversary of the Iraq war by touting efforts to build democracy there and avoiding any mention of the daily violence still raging three years after he ordered an invasion. 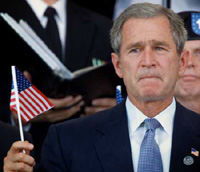 The president did not utter the word “war” in his statement yesterday.

“We are implementing a strategy that will lead to victory in Iraq,” the president assured a public increasingly sceptical that he has a plan to end the fighting after the deaths of more than 2,300 UStroops.

Administration officials repeated the mantra that progress continued towards building a unified Iraqi government and nation.

“Now is the time for resolve, not retreat,” defence secretary Donald Rumsfeld wrote in a column for The Washington Post. “Turning our backs on post-war Iraq today would be the modern equivalent of handing post-war Germany back to the Nazis.”

Yet there were acknowledgements from the top commander of US forces in Iraq that the situation was fragile and that he did not predict the strength of the uprising.

“I did not think it would be as robust as it has been,” General George Casey said on NBC’s Meet The Press. “And it’s something that, obviously, with my time here on the ground, my thinking on that has gained much greater clarity and insight.”

Bush did not mention the militant attacks, the car bombs or the mounting Iraqi deaths in a two-minute statement to reporters outside the White House after returning from a weekend at Camp David. Avoiding the word “war”, he called the day “the third anniversary of the beginning of the liberation of Iraq”.

The president only indirectly referred to the violence when he said he spent the morning reflecting on the sacrifices made by US troops. Bush said he spoke by phone earlier in the day with the US ambassador to Iraq, Zalmay Khalilzad, and had received a positive report.

The White House is trying to remind the disapproving public of Bush’s vision for Iraq with a public relations blitz. The president plans to give a series of speeches on Iraq, beginning today in Cleveland.

More than three-fourths of the public thinks it is likely that Iraq is headed towards civil war, according to an AP-Ipsos poll taken in early March, reports Ireland Online.