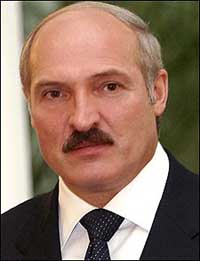 Main opposition candidate Alexander Milinkevich, who declared the vote a farce and called for a a new election at a rally that drew thousands of supporters, received 6 percent of the vote, Yermoshina said.

Lukashenko, is an authoritarian leader who has ruled the ex-Soviet republic with an iron fist since 1994.

Milinkevich, called on his supporters to return to a central Minsk square Monday to continue their protest -- signaling the opposition would try to hold a sustained protest of the sort that brought down long-lived regimes in former Soviet republics including Ukraine and Georgia.

"We demand new, honest elections," Milinkevich told the crowd through a small bullhorn. "This was a complete farce."

A crowd of thousands had gathered at Oktyabrskaya Square to protest the vote and rallied for about three hours before demonstrators moved towards another square to place flowers at a monument.

There were fears of violent confrontation as Milinkevich had called on supporters to come to the square to protest the vote, whose official results he said he would not accept. The government had warned that election-day gatherings would not be allowed.

The crowd was the biggest the opposition had mustered in years, reaching at least 10,000, according to AP reporters' estimates, before it started thinning out as heavy snow began to fall.

"Lukashenko cannot have won 80 percent!" said Alexander Kozulin, another opposition candidate, referring to exit polls -- conducted by two groups the opposition says are loyal to the government and released just hours after voting began -- that projected he would win more than 80 percent of the vote, reports CNN.