100 protesters march on the U.S. Embassy in Philippines

About 100 protesters marched on the U.S. Embassy in the Philippine capital Monday to demand Washington pull out troops from Iraq, joining demonstrators worldwide in marking the war's third anniversary. 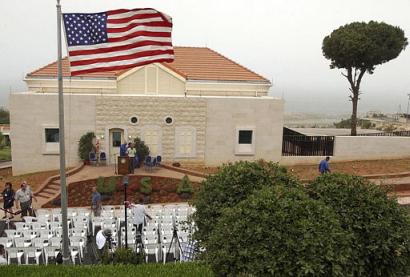 100 protesters march on the U.S. Embassy in Philippines

Members of a left-wing coalition called Iraq Solidarity Campaign carried placards saying, "End the U.S. occupation of Iraq", the same message delivered by hundreds of thousands of peace activists who took to the streets of Asia, Europe and the United States over the weekend.

Some solemn, others noisy, many of the protests drew smaller-than-anticipated crowds, far short of the millions who protested the Iraq invasion in March 2003 and the anniversary in 2004.

Anti-war protests on Sunday included a 1,000-strong rally in Seoul, where demonstrators urged the South Korean government to bring their troops home.

In Malaysia's largest city, Kuala Lumpur, about 600 people protested peacefully, unlike a gathering last year when police used a water cannon to disperse demonstrators. In Tokyo, about 800 demonstrators took to the streets, after some 2,000 protested the day earlier.

Hundreds of anti-war protesters marched silently and carried symbolic caskets through the capital of Puerto Rico, the U.S. Caribbean territory.

The march Sunday was led by the families of Puerto Rican soldiers killed in Iraq and Afghanistan. Dressed in black and marching behind the families, demonstrators carried 49 caskets, representing the number of soldiers from the island who have been killed in the two countries.

"We wanted to do something simple, something so simple and solemn as a funeral march through our towns," said Wanda Colon, a spokeswoman for the coalition of more than 30 community groups that organized the march, reports the AP.