Premier Wen Jiabao vowed Tuesday to protect the rights of the farmers that helped bring the ruling communists to power as the parliament endorsed a five-year economic blueprint aimed at closing the wide and volatile gap between rich and poor. Chairman Mao called them the "contradictions between the people" the inevitable clashes of interests that China 's ruling Communist Party must reconcile as it navigates through unprecedented economic reforms. 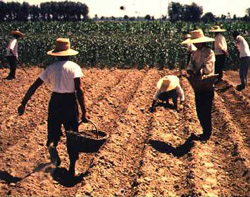 Struggling to ensure the stunning growth that has made China the world's fourth biggest economy is politically and environmentally sustainable, Beijing 's leaders are emphasizing their commitment to the many millions left behind by the economic boom. It's a goal that has gained urgency amid mounting protests over seizures of farmland, pollution and other conflicts.

"We need to respect the right of the farmers to have their own livelihoods," Wen said in a nationally televised news conference at the close of this year's 10-day session of the National People's Congress. "We need to deliver tangible benefits to the farmers." The 2,891-member parliament, which routinely rubber stamps policies already decided by the government, approved by a more than 97 percent margin Wen's report on plans for 2006 and the five-year economic plan.

It calls for reducing pollution and waste of resources by bringing economic growth down to 7.5 percent a year through 2010, with 2006 growth at 8 percent way below the 9.9 percent seen in 2005. The focus should be on environmental standards and quality of life, rather than numerical targets, Wen said. "The thing that pains me most is that ... we haven't yet been able to find better solutions for problems most of concern to the general public, such as the problem of medical services, education, housing and security," Wen said.

The government plans billions of dollars of new spending this year on rural schools, health care, roads and aid to farmers, to help spread prosperity to the 800 million of China 's 1.3 billion people living in the countryside. "Most of all, they'd like to control the overall quality of growth, not to slow it down," said Stephen Green, senior economist at Standard Chartered Bank in Shanghai .

Conservatives complain that China 's economic reforms have failed to produce enough benefits for the majority of Chinese while enriching a tiny elite and fueling corruption _ the inescapable challenge of balancing interests harkening back to Mao Zedong's writings on handling "Contradictions Among the People."

China 's leaders face increasingly bloody rural conflicts over pollution and seizures of land for construction of shopping malls and other projects. The number of cases of public disorder rose 6.6 percent last year to 87,000, according to government figures.

In the deadliest reported incident, at least three villagers in the southern province of Guangdong were killed in December when police opened fire on demonstrators protesting inadequate compensation from land seized for a power plant.

Wen did not say if the government might let farmers own land for the first time since the 1950s _ a step that could help them protect their rights. The parliament also put off considering a landmark property law, amid rare signs of discord over its contents.

Turning to relations with rival Taiwan , Wen accused Taiwanese President Chen Shui-bian of damaging regional stability by closing down an agency dedicated to uniting the island with the mainland, which claims Taiwan as part of its territory. "We are fully prepared for all eventualities," Wen said in a possible reference to Beijing 's repeated threats to attack the island if it tries to make its de facto independence permanent.

But he also offered to open official contacts with Chen's Democratic Progressive Party if it renounces its pro-independence stance. Wen pledged that China 's military, the world's largest, will never threaten another country. He defended a 14.7 percent increase in defense spending as necessary to improve troops' living conditions.

But his main focus, like that of the entire congress, was on domestic concerns, such as the environmental crisis spawned by rapid industrialization. That issue gained attention following a series of industrial disasters that poisoned rivers and threatened water supplies for millions of people. Wen also promised improvements in work safety, yet another realm where profits often have trumped the public interest.

The party faces a growing challenge in reconciling such contradictions, while avoiding political reforms that might threaten its grip on power, says Gordon Chang, a lawyer and author of books on China 's politics and foreign relations. "It is not as if all these problems can be solved with money," Chang says. "It's not that China isn't making progress, the issue is it making progress fast enough", reports the AP.