Sweden on Tuesday was to return a 134-year-old totem pole that was taken from a native Indian tribe in Canada decades ago. The totem pole, brought to Sweden from Canada in the 1920s, was to be handed over to representatives of the Haisla tribe of British Columbia during a ceremony at Sweden 's National Museum of Ethnography in Stockholm . 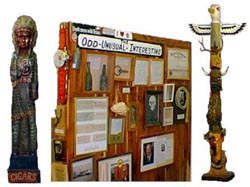 The Haisla Nation erected the 9-meter (30-foot) totem pole in 1876 at the mouth of the Kitlope River in northwestern Canada to honor their forest spirit Tsoda for saving the tribe from a smallpox epidemic. It disappeared from the region in the 1920s after then-Swedish consul Olof Hansson took possession of it under mysterious circumstances and donated it to the Stockholm Ethnographic museum. For half a century, it laid in storage. Since 1980, it was a centerpiece of the museum's Native Americans exhibit.

After an extensive search, the tribe found the totem pole and demanded its return, claiming it was stolen. The museum contacted the government, which in 1994 decided the totem pole should be returned to its original indigenous owners as a gift, on the condition that it was properly preserved at an indoor facility.

The Haisla tribe delivered a hand-carved replacement to the museum in October 2000. It was to be raised outside the museum during Monday's ceremony. Among the invited speakers were Sweden 's Culture Minister Leif Pagrotsky and Canadian Ambassador Lorenz Friedlaender. Former Swedish ice hockey star Borje Salming, who played professionally in Canada , was also to participate. For the Haisla, the original pole symbolizes respect, honor and personal accountability, reports the AP.