A top Islamic militant leader who surrendered to authorities last week has confessed to ordering a string of bomb attacks across Bangladesh that killed 26 people and wounded dozens, a government investigator said Friday. Shaikh Abdur Rahman, the leader of the banned Islamic militant leader Jumatul Mujahedeen Bangladesh, which has been blamed for the violence, is being questioned since his surrender last week to security forces who surrounded his hide-out. 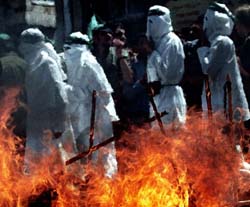 Rahman allegedly told investigators that he ordered his men to bomb court houses and government buildings in a wave of attacks that started last August, Lt. Col. Gulzar Uddin Ahmed, an intelligence officer involved in questioning him, told reporters.

Ahmed said Rahman told them that he wanted to draw attention to his campaign to establish harsh Islamic rule in Muslim-majority Bangladesh , which is governed by secular laws. Ahmed did not provide further details.

Islam, who was wounded while trying to blow himself up before the arrest, is recovering in a state-run hospital in Dhaka and is not yet fit for interrogation, officials said.

Both men faces sedition and murder charges. If convicted, they could face the death sentence. A court in southern Barisal city last month sentenced both in absentia to life in prison for ordering a bombing that killed two judges last year, reports the AP.