Serbian President Boris Tadic was to meet on Friday with his Austrian counterpart, Heinz Fischer, and attend a ceremony in Vienna being held ahead of the three-year anniversary of the assassination of the late Serbian premier Zoran Djindjic. Tadic was to meet with Fischer at Vienna's former imperial Hofburg palace before heading to the ceremony in memory of Djindjic, Serbia's first democratic premier since World War II. Djindjic was gunned down on March 12, 2003 , as he was stepping out of his car in front of the government building in central Belgrade . 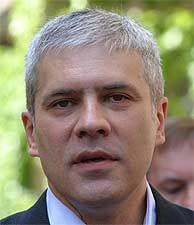 Djindjic's widow, Ruzica, also was scheduled to attend the remembrance. The late Serb leader's suspected assassins, who include 13 former paramilitary or organized crime figures, went on trial in Belgrade in December 2003, reports the AP.