European Union defense ministers failed Tuesday to end weeks of debate over how to run a military mission to Congo in response to a U.N. request for support to its peacekeepers in the vast African nation. Germany insisted more talks were needed with Congolese leaders before committing troops to the mission, meant to help secure elections designed to end years of civil strife. EU foreign policy chief Javier Solana was expected to travel soon to the country's capital, Kinshasa . 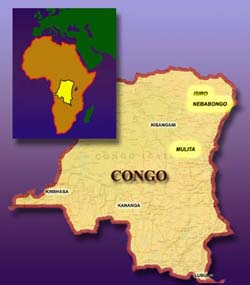 European nations have agreed in principle to respond to the U.N. request for rapid-reaction units to back its 16,000 peacekeepers during the election period, which is expected to last several months after the first-round presidential vote in June.

However, the 25 governments have been struggling since January to muster around 1,200 troops needed for the operation. Tuesday's meeting at this Alpine resort also ended with no clear commitment on which country would lead the EU force, how long it would be deployed and where exactly it would be based and operate.

Germany has faced pressure to lead the operation because it currently heads the EU's rotating system of "battlegroups", quick response units designed for deployment in international hot spots.

But Germany said it would not agree to taking the lead until it had clear offers of support from other EU members and firm agreement from Congolese authorities. Diplomats had hoped Tuesday's meeting in this Alpine city would lead to clearer commitments. The prolonged hesitation risks calling into question the bloc's ambitions to develop a military capability to operate independently of NATO.

Germanys defense minister, Franz-Josef Jung, told reporters he wanted more concrete figures on the number of troops. Jung also said Germany would want to impose a four-month time limit on the mission and restrict the deployment of EU troops in Congo to Kinshasa .

Solana said Monday that the likely plans would include a few hundred EU troops in the Congolese capital, but most forces would likely be based outside Congo in a nearby country ready to intervene if there is trouble during the elections. Diplomats said nations including Poland , Sweden , Austria and Spain may offer small numbers of troops if an agreement on a mission leader could be reached.

British Defense Secretary John Reid said Britain could help with planning the mission, but commitments in Afghanistan and Iraq would prevent any significant deployment of British troops. Solana said Monday he was in regular contact with Congolese President Joseph Kabila, who backed the EU's preparations. But the Germans want more guarantees that local leaders support the European deployment.

The U.N. peacekeepers in Congo frequently come under fire in the lawless east of the country. European troops would be used to provide emergency backup and evacuation for the U.N. troops and civilian election observers, reports the AP.