An Islamic militant leader blamed for recent deadly bombings was in stable condition Tuesday, a day after he was wounded when he apparently detonated a bomb in an abortive attempt to avoid capture by security forces in northern Bangladesh, officials said. 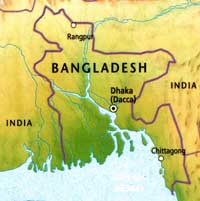 Islam, who suffered serious burns and splinter injuries to his whole body, was flown to a hospital in Dhaka for treatment, said Syed Rezaul Gani, a spokesman for the Bangladesh Rifles border force.

He was in stable condition in a special care unit, a doctor at the hospital said, asking not to be named as he was not authorized to talk to the media.

Islam is a leader of Jumatul Mujahedeen Bangladesh, a militant group blamed for a wave of bombings across Bangladesh in recent months that killed at least 26 people. The group seeks to introduce harsh Islamic rule in Bangladesh, a predominantly Muslim nation governed by secular laws.

Acting on a tip, about 50 security agents surrounded Islam's tin-roof house in Muktagachha, about 110 kilometers (70 miles) north of the capital, Dhaka, and urged him to surrender.

The militants responded with gunfire and Islam apparently detonated a bomb inside the house in an apparent suicide attempt that ripped the roof off and injured at least seven people, including Islam, his bodyguard and some security agents, said Lt. Col. Gulzar Uddin of the Rapid Action, reports the AP.