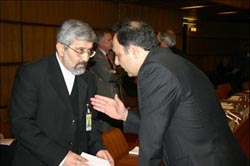 Aso told Lavrov that he urged Iran 's Foreign Minister Manouchehr Mattaki during the latter's February visit to Tokyo to see Tehran 's discussions with Moscow as a way to defuse the problem, the statement said. Russia planned to continue discussions about the Iranian issue at the International Atomic Energy Agency's talks taking place this week in Vienna , Lavrov said according to the statement.

Moscow, with the support of the United States and other countries, has offered to enrich Iran's uranium in Russia to ensure greater oversight but Iran, insisting its goals are peaceful, has said it should be free to carry out some enrichment domestically, reports the AP.