OPEC is unlikely to cut production levels this week and will opt instead to keep output unchanged amid expectations that high prices could begin dropping as early as next month, key oil ministers signaled Monday. Oil prices still hovering well above US$60 a barrel should fall in the second quarter if the Organization of Petroleum Exporting Countries maintains production at current levels and there is no significant rise in international tension, said Kuwait's energy minister, Sheik Ahmed Fahd Al Ahmed Al Sabah. 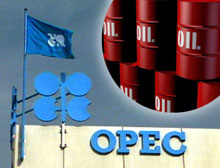 Kuwait wants the 11-nation cartel to maintain its current production ceiling of 28 million barrels a day "just to help the prices be more stable," Sheik Ahmed said in Kuwait City before Wednesday's OPEC meeting in Vienna. "There is oversupply in the second quarter," he said, adding that he expected a surplus of 1.5 million to 2 million barrels a day in the quarter spanning April to June. Prices should drop during that period, barring a rise of "tension and geopolitical problems," he said.

Saudi Oil Minister Ali Naimi said his country also opposed production cuts, which are favored by fellow OPEC member Venezuela in anticipation of lower demand. "Any decision to decrease oil production would be the main reason for a rise in prices," Naimi said in an interview with the pan-Arabic newspaper Al Hayat published Monday, declaring: "OPEC is not supposed to raise oil prices."

Venezuela's oil minister, Rafael Ramirez, said last week that OPEC members should consider cutting production by 500,000 to 1 million barrels of crude a day. The South American country is one of the group's most strident voices in favor of constraining output to keep prices high.

But many OPEC members repeatedly have said that prices should not exceed US$50 a barrel. Light, sweet crude for April delivery was US$63.16 a barrel at midafternoon Monday in electronic trading on the New York Mercantile Exchange.

"I think an OPEC price ceiling of US$40-US$50 a barrel is favorable for the organization's members," Shamkhi Faraj, a top Iraqi oil official, told reporters Monday before leaving Baghdad for Vienna. He, too, predicted the production ceiling would remain unchanged.

Iran's OPEC governor, Hussein Kazempour Ardebili, also suggested the group was unlikely to raise the ceiling and urged member producers to demonstrate an "observance of discipline" by not pumping above their quotas.

Ardebili told the unofficial ISNA news agency that Tehran's escalating standoff with the West over its suspect nuclear program would not affect its exports of crude, saying Iran would continue to serve as "a stable source of supply and as one of the main suppliers of oil to the world." His comments came as the International Atomic Energy Agency's 35-nation board convened a meeting in Vienna, amid threats by Iran to begin large-scale uranium enrichment if the U.N. Security Council intervenes.

The Iranian nuclear issue has not been the only factor stoking worries about disruptions to supply. Instability in Nigeria and the threat of terrorist attacks on pipelines in the Middle East including the Feb. 24 bombing of the world's largest oil-processing complex, Saudi Arabia's Abqaiq facility also have helped keep prices high.

"No doubt that what keeps the oil prices at the current level is instability, and the political situations in the areas of the oil-producing countries affect the markets," Naimi said, but he cautioned: "there is no fear that oil will not be available." Although the group is not scheduled to meet again until early June in Caracas, OPEC President Edmund Daukoru said Monday that members might meet informally in late April on the sidelines of an International Energy Forum session in Doha, Qatar, reports the AP.