13 killed, some policemen wounded in rebels attack in Nepal 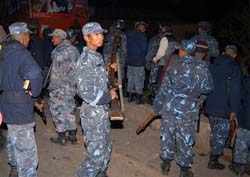 13 killed, some policemen wounded in rebels attack in Nepal

The rebels blocked the only highway to the town, about 550 kilometers (345 miles) east of the capital, Katmandu, before launching the overnight attack, firing at the security bases and bombing several government buildings, said the chief officer of the district, Krishna Prasad Poudel. Soldiers recovered the bodies of eight rebels, an army official, a policeman, and two civilians who were caught in the cross fire, he said. One policeman died while being treated at a hospital.

Twelve other police were wounded in the fighting, which continued until morning. Government troops have taken control of the town and surrounding areas and are searching the mountainous terrain for the attackers, Poudel said. An official at the Royal Nepalese Army headquarters in Katmandu, who cannot be named under government policy, said military helicopters equipped with night-vision capabilities reached the site around 2 a.m. and fired on the attackers.

The rebels fled before dawn, taking their wounded and dead fighters with them, the official said. A total of 103 inmates in the jail were freed by the rebels, but 16 were later recaptured or surrendered to authorities.

The rebels have escalated attacks since withdrawing from a four-month unilateral cease-fire earlier this year because the government refused to join the truce. The rebels, who say they are inspired by Chinese revolutionary Mao Zedong, have fought for a decade to replace the constitutional monarchy with a communist government. The insurgency has claimed nearly 13,000 lives, reports the AP.