An Uzbek court on Monday sentenced an opposition leader to more than 10 years in prison on charges of organizing a criminal group, tax evasion and money laundering. 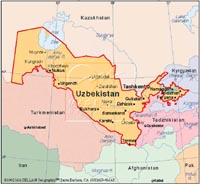 Sandjar Umarov, chairman of the Sunshine Uzbekistan group, pleaded innocent to all charges. But Judge Zokirjon Isayev said "Umarov's statements about his absolute innocence have been fully disproved by witness testimonies and documents."

Isayev said Umarov should be jailed for 14 1/2 years, but reduced the sentence to 10 years and eight months in accordance with a presidential order issued in December.

Umarov's defense lawyer, Valery Krasilovsky, said the charges had not been proven and he would appeal the sentence.

Sunshine Uzbekistan was a vocal critic of the government's bloody suppression of an uprising last May in the eastern city of Andijan. Rights groups say troops fired on unarmed protesters, killing as many as 700 people. The government says 187 people died and that Islamic extremists provoked the violence.

Despite Western criticism, President Islam Karimov's authoritarian government has refused to allow an international inquiry into the Andijan events and evicted U.S. troops from a military base that was used for operations in neighboring Afghanistan, reports the AP.