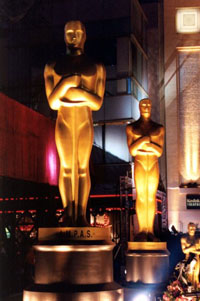 This was one of the bigger upsets in Oscar history. "Crash" is the story of a diverse group of people living in Los Angeles who connect and clash over the course of two days.

As the series of events heighten already-existing racial and cultural tensions, individuals are brought face to face with complexities that their prejudices have prevented them from seeing.

It premiered at the Toronto Film Festival in September 2004, and was released internationally in 2005. The film is a commentary on racial and social tensions in Los Angeles.

Most of the characters depicted in the film are racially prejudiced in some way, and become involved in conflicts which force them to examine their own prejudices. Through these characters' interactions, the film attempts to show that racism is common in modern America.

The movie, a true Oscar rarity, was shot outside the major studio system on a tiny budget of 6.5 million dollars. It was never expected to be any challenge to "Brokeback Mountain," which won 8 nominations and earned an Oscar for director Ang Lee.