Japan, U.S. to hold talks in Honolulu next week

Japan and the United States will hold talks next week on a plan to downsize the U.S. military presence on a southern Japanese island and give Tokyo greater responsibility for security in the Asia-Pacific region, the Japanese Foreign Ministry said Friday. The two countries will discuss details of an October agreement that includes a proposal to shift 7,000 U.S. Marines from Okinawa to the U.S. territory of Guam during the five-day talks beginning Tuesday in Honolulu , Hawaii , the ministry said in a statement. 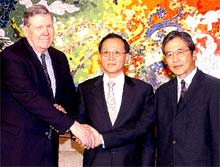 Japan, U.S. to hold talks in Honolulu next week

Kazuyoshi Umemoto of the ministry's North American Affairs Bureau and Hironori Kanazawa of the Defense Agency's Defense Policy Bureau will meet Richard Lawless, U.S. defense deputy undersecretary for Asia and Pacific Affairs, according to the statement. The U.S. military realignment also involves a relocation of a heliport in Okinawa to another base on the crowded southern island, and a first assignment to Japan of a nuclear-powered carrier to a port near Tokyo .

The realignment plans have met local opposition. Among them, the city of Iwakuni in southwestern Japan will hold a referendum on March 12 over whether to approve a planned increase in the number of U.S. aircraft operating at Iwakuni Air Station, reports the AP.