India will be able to buy more high-tech arms from U. S.

Shortly before President George W. Bush arrived in Hyderabad, Washington said India will be able to buy more sophisticated fighter aircraft and other high-tech arms from the United States. 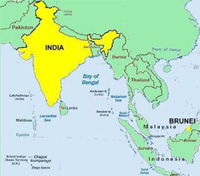 India will be able to buy more high-tech arms from U. S.

This would include state-of-the-art combat aircraft including the F-16 and F-18, the department said in a statement released Thursday.

"It is our goal to help meet India's needs in the defense realm, and to provide important capabilities and technologies that India seeks. We are on a path to accomplish this," the statement said.

The defense decision came after the United States and India signed a groundbreaking nuclear pact during a visit to New Delhi by the U.S. leader.

Under the deal reached by Bush and Indian Prime Minister Manmohan Singh, the United States agrees to send nuclear fuel and expertise to India in exchange for New Delhi opening up its civilian nuclear reactors to international inspectors.

The arms decision will be viewed with interest by India's regional rival Pakistan, which Bush will visit briefly on Saturday.

India was disappointed by a U.S. decision nearly 12 months ago to sell F-16s to Pakistan, a key U.S. ally in its war on terror.

Bush arrived in one of India's premier technology cities, Hyderabad, on Friday as its large Muslim population shut down markets and businesses in the old quarters in protest over his visit.

The protests reflect India's mixed feelings about the United States -- a country seen as a loyal friend by some and a global bully by others.

On Wednesday, nearly 150,000 protesters, most of them Muslims, demonstrated in New Delhi, reports CNN.