Two bombs set by suspected insurgents exploded within two hours of each other north of the Myanmar capital, but no injuries were reported, a state-run newspaper said Friday. One explosive went off near a high school in Toungoo, 280 kilometers (180 miles) north of Yangon , which was closed when the blast occurred Thursday, the Myanma Ahlin newspaper said. A second bomb Thursday exploded near an electric power transformer in the town. 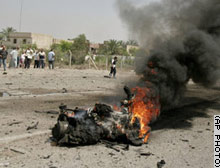 There were no casualties or damage reported in either explosion. "It was found that terrorist insurgents were .... blowing up bombs with the sinister aim of destroying community peace and tranquility and to cause public panic," the paper said.

There were no immediate claims of responsibility and the government has not yet blamed any specific group. In the past the government has claimed that either ethnic minority guerrillas or opposition exile groups were behind bombings in Yangon and other parts of the country. This was the second explosion in Toungoo. A small bomb exploded and another bomb was found unexploded at a train station in Toungoo on Jan. 15, reports the AP.