A Hamas delegation will travel to Moscow Friday for high-level talks that could end its international isolation, but the militant Palestinian group seems unlikely to heed Russian calls to soften its hostility to Israel. 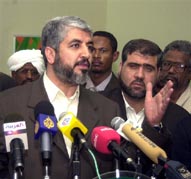 Russia's invitation to Hamas has provoked anger in Israel and undercut Western efforts to isolate the radical Islamic movement. Russia says it will insist that Hamas renounce violence and recognize Israel's right to exist.

"Our trip to Moscow opens new prospects for peace in the Middle East," Mashaal said in an interview with NTV television in Damascus, Syria.

"Our people want simple things: to be free and to have sovereignty. All this is impossible without an end to the occupation," said Mashaal, who declined to comment on the question of recognizing Israel.

Russia's special Middle East envoy, Alexander Kalugin, said the aim of the talks was not to dictate conditions to Hamas but to use persuasion.

"We're not going to put forward demands. We'll seek to convince them that now is the time to take responsible decisions. If you come to power and form a government, you must understand you are assuming a great responsibility," said Kalugin in an interview with NTV.

The Palestinian envoy to Russia, Bakir Abdel Munem, expressed hope that Hamas would reconsider its attitude toward Israel, reports AP.