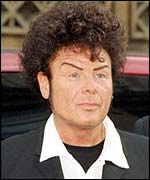 The former glam rocker has been accused of committing obscene acts, including kissing, fondling and other physical acts, with a 10-year-old and 11-year-old at his rented house in the southern port city of Vung Tau last year. He has denied the allegations.

Glitter faces three to seven years in prison if convicted.

Glitter, 61, whose real name is Paul Francis Gadd, wore sunglasses, black pants, shirt and cap as police escorted him through a group of reporters Thursday morning into the yellow concrete courthouse in Ba Ria-Vung Tau province.

Dozens of curious onlookers crowded outside the gates of the courthouse as the armored police van drove up. Glitter had been held at Phuoc Co prison outside Vung Tau since November.

His trial is closed to the public, but the verdict will be read publicly on Friday.

Glitter was escorted out of the court for a lunch break after 3 1/2 hours of testimony. Reporters waiting outside shouted two questions, "Are the girls lying?" and "Did you plead innocent," to which he nodded in response to both.

At the end of the day's testimony, Glitter was led out, smiling broadly but refusing to make any comments.

Afterward, Glitter's attorney Le Thanh Kinh said prosecutors had presented their case and recommended that Glitter be sentenced to three to four years in prison before being deported from Vietnam, reports the AP.