Suspected Tamil Tiger rebels abducted a Tamil man from his home in northern Sri Lanka, the military said Thursday, as authorities investigated whether the victim is linked to groups that oppose the guerillas. 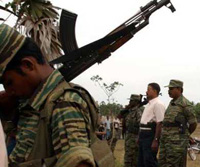 Four suspected rebels snatched A. Dineshswaram, 23, from his home in Muttur last week, said military spokesman Brig. Sudhir Samarasinghe, adding that his disappearance was only reported by his father Wednesday. Muttur is about 230 kilometers (140 miles) northeast of the capital, Colombo.

Samarasinghe said the motive behind the reported abduction was not immediately known, but investigators were probing whether Dineshswaram has any links with Tamil groups that are opposed to the Liberation Tigers of Tamil Eelam.

There have been several reported abductions blamed on the rebels and groups opposed to them since violence flared up in December in Sri Lanka's northeast. The rebels accuse the military of backing a breakaway faction of the rebels, a charge the military denies.

Sri Lanka's civil war was halted by a 2002 cease-fire, but tension has grown after recent violence, mostly blamed on the rebels, that has left at least 150 people dead, including 81 government security officers.

Government ministers and rebel leaders met in Geneva last week in a bid to save the faltering cease-fire. They agreed to meet again in Geneva on April 19-21, reports the AP, reports the AP.