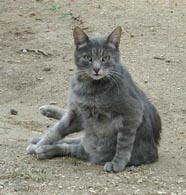 The cat was found over the weekend on the Island of Ruegen, where more than 100 wild birds have tested positive for H5N1, said Thomas Mettenleiter, head of Germany's Friedrich Loeffler Institute. The cat is believed to have eaten part of an infected bird, following a pattern of disease transmission seen in big cats in Asia, the institute said.

Mettenleiter insisted, however, there was no danger to humans, as there have been no documented cases of a cat transmitting the virus to a human.

"It has nothing to do with the spread of the disease or the threat of an epidemic," Mettenleiter told ZDF television. Local authorities, however, urged pet owners to keep their animals indoors as a precaution.

Maria Cheng, of the World Health Organization in Geneva, however said there was not yet enough information on how the disease is transmitted to be sure. She noted that tigers and snow leopards had been infected in Thailand after being fed chicken carcasses, dying from H5N1 in 2003 and 2004.

Twenty-one people in the Asian part of Turkey tested positive for H5N1 in January and four of them, all children, died.

Scientists are concerned that H5N1 could mutate into a form that is transmitted easily among humans, which could lead to a pandemic.

Also Tuesday, several other European nations registered cases of H5N1, the worst outbreak coming from Russia, where authorities confirmed that the illness that devastated a poultry farm in the southern region of Krasnodar was bird flu, not Newcastle disease, as previously believed.

More than 100,000 chickens at a farm in the village of Lavliniskaya have been killed to try to stem the spread of the disease, Gov. Alexander Tkachev said. A state of emergency was declared in the district.

In France, where H5N1 was confirmed in commercial birds there over the weekend, some 30 countries including the United States have partially or totally banned French poultry products. A group of veterinary chiefs meeting in Paris said Tuesday that no country should consider itself safe from lethal bird flu and that it is "highly likely" that the disease will continue its spread in poultry stocks in Europe and beyond.

"The risk now is high for everybody," said Bernard Vallat, director of the Paris-based World Organization for Animal Health, which hosted the two-day meeting of experts from some 50 countries.

Authorities in Sweden and Hungary also said they were conducting further tests to confirm whether wild birds in each country that had tested positive for a form of bird flu were infected with the deadly H5N1 strain.

Slovenia, as well as the southern German state of Bavaria, both registered new cases of H5N1 in wild fowl, reports AP.