Parmalat Chief Executive Enrico Bondi, who has been helping the dairy giant bounce back from a fraud scandal, appeared at the Milan trial in the case Tuesday hoping to testify for the first time. As he walked into the courtroom, Bondi did not tell reporters what he hoped to tell the court, and a spokesman, Marco Rubino, said he didn't know if the CEO would make a statement to the tribunal or answer questions. 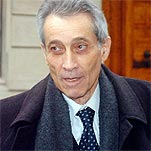 Also in court was former Parmalat Chairman Calisto Tanzi, who is on trial along with 15 others on charges of market rigging, providing false accounting and misleading Italy's stock market regulator in the 15 billion (US$18 billion) scandal that as dubbed "Europe's Enron." Tanzi told reporters his conscience was "serene."

Prosecutors have alleged that Parmalat spun a web of financial trickery to cover up its financial losses and raise cash, tactics that investigators said began shortly after the company went public in 1989. The fraud was exposed in December 2003 when Parmalat acknowledged that a Ђ 3.95 (US$5 billion) account that a Cayman Islands-based subsidiary claimed to hold with Bank of America did not exist. Tens of thousands of small investors lost savings in the scandal.

Bondi was brought in as a government-appointed administrator to draw up a financial and industrial restructuring plan. In November, Parmalat's board of directors confirmed Bondi as the dairy and juice company's chief executive. The company is based near Parma , in northern Italy , reports the AP.