Seventeen inmates wounded during a rebellion at Kabul's main jail were rushed to hospital along with the bodies of four who were killed, after the prisoners agreed to halt two-days of rioting, officials said Tuesday. 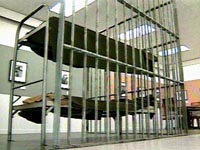 Authorities said they had restored supplies of water, electricity and food to the prisoners after progress was made in negotiations. A tanker truck carrying water and another vehicle loaded with potatoes and rice was seen driving into the compound Tuesday.

The supplies were withheld late Sunday from the roughly 2,000 prisoners in the facility, including women and their children, even though the violence was blamed only on some 350 Taliban and al-Qaida detainees.

The Afghan army commander in charge of security at Policharki jail on the outskirts of the capital, Kabul, said there had been no violence since late Monday.

"Everything is completely calm," said Gen. Zamarai, who uses only one name. "I was even talking and joking with some of the prisoners this morning."

The prisoners still control the main wings of the sprawling jail, but they have stopped trying to break out from their cell blocks into the surrounding grounds where police and soldiers have taken up positions, he said.

Zamarai said 17 of the wounded were taken from the facility to a hospital in the center of Kabul for treatment. Officials have said a total of 38 people have been hurt. Among the four dead was a Pakistani and a Tajik. Their identities were not known.

Outside the jail, dozens of relatives of inmates pleaded with guards for news. Some women beat the ground as their children wailed, fearful that their loved ones may be among those killed, reports the AP.