Russia 's Foreign Ministry said it hoped nuclear talks with Iran would resume soon, but news reports said the Iranian delegation might not arrive Tuesday as had been expected. "We strongly hope that the talks would resume in Moscow in the nearest days," ministry spokesman Mikhail Kamynin, said, according to the Interfax news agency. 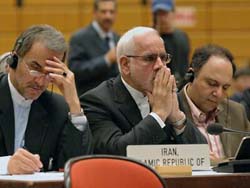 Russian news reports initially said the Iranians would arrive Tuesday, but later they quoted unidentified diplomats and negotiators as saying that they might arrive overnight or on Wednesday. Moscow 's offer to have Iran 's uranium enrichment program in Russia has been backed by the United States and the European Union as a way to provide more guarantees that Tehran 's atomic program cannot be diverted to build weapons. Iran insists its nuclear program is only for power generation, but many in the West fear Iran is aiming to develop atomic bombs.

Russia has warned Tehran that its enrichment offer was contingent on Iran freezing its own uranium enrichment activities, something Tehran has so far refused to do. The previous round of nuclear talks in Moscow last week brought no visible progress. On Sunday, the Iranian nuclear chief said after talks with his Russian counterpart in Iran that they had agreed in principle to Moscow 's enrichment plan. But Western diplomats dismissed the statement as an Iranian spin effort and an attempt to split the global community.

Russia 's Foreign Minister Sergey Lavrov stressed Monday that the talks between Russia and Iran had not ended and would continue until the International Atomic Energy Agency board of governors' meeting on Iran set for March 6. That meeting could start a process leading to punishment by the U.N. Security Council, which has the authority to impose sanctions on Iran , reports the AP.