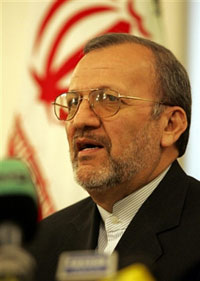 Iran has a right to nuclear technology for peaceful purposes and is committed to not building a nuclear weapon, Iran's foreign minister said Tuesday in Japan.

But he denied that Tehran wanted to build an atomic weapon.

"Iran also, like Japan, enjoys its right to have nuclear technology for peaceful purposes," Mottaki said after the talks. "We are against nuclear weapons," reports the AP.