A consortium of German, Indian and Malaysian companies will build a lubricant component factory for the national oil company Petronas, a statement said Tuesday. The base oil plant will be built in the southern state of Malacca by the consortium of Lurgi AG of Germany, Larsen & Toubro Ltd. of India ,and three Malaysian companies: Kejuruteraan QKS Sdn Bhd, L&T-ECC Construction (M) Sdn Bhd and Lurgi (M) Sdn Bhd, the Petronas statement said. 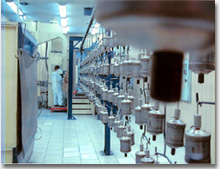 It said the contract to build the plant was awarded on Monday by PETRONAS Penapisan (Melaka) Sdn Bhd, a subsidiary of Petronas. It will be the first such plant in Malaysia , and will be located within the Petronas Refinery Complex in Malacca. To be ready by the middle of 2008, the plant will produce 6,500 barrels per day of mostly Group III base oil, a major component for the manufacture of top tier automotive and industrial lubricants, the statement said. It said the products will be marketed to the domestic as well as international markets, reports the AP.