The State Department condemned authorities in Belarus for their alleged harassment of citizens for exercising their civil and political rights. 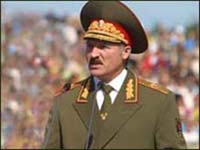 "Actions like this call into question the commitment of the government of Belarus to conduct upcoming elections freely and fairly," Ereli said, referring to voting March 19 in which President Alexander Lukashenko is running for a third term, reports AP.

According to Prensa Latina, arrests by Belarus State Security Committee (KGB) halted the activities by the group Associate Civic Initiative, financed by a US non governmental organization.

A KGB source said the US National Democratic Institute created, ran and financed the ACI, violating domestic laws that ban the existence of NGOs financed from overseas.

The ACI ignored numerous official warnings on the illegal nature of its activities and many members were sanctioned between 2003 and 2005, reaching their climax in the early 2006, said the source.