Pakistan hunts for more than 100 Taliban from Afghanistan

Pakistan was hunting for more than 100 Taliban fugitives whose names were on a list provided by Afghanistan's leader, a security official said Wednesday. 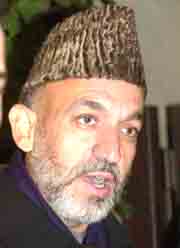 Pakistan hunts for more than 100 Taliban from Afghanistan

"We did receive information about these suspects, and we will capture them, if they are here," he said.

Sherpao declined to say how many names were on the list or provide other details about the fugitives, believed to be hiding in Pakistani cities or in rugged tribal regions near Afghanistan.

But a security official told the AP that between 100 and 150 suspects, mostly Taliban remnants, were listed and authorities have begun searching.

"We have started our work," said the official, who spoke on the condition of anonymity because he was not authorized to speak to the media.

Afghan officials have said that Taliban chief Mullah Omar and his associates are hiding near the Pakistan-Afghan border, a claim Pakistan has said lacks evidence.

Pakistan, once a Taliban supporter, is now a key U.S. ally in the war on terror. It has deployed thousands of troops along the Afghan border and says it has done everything it can to flush out remnants of the Taliban regime and al-Qaida, reports the AP.