Nike and Adidas in patent fight

Nike Inc., the world's biggest maker of athletic shoes, accused rival Adidas-Salomon AG of infringing its patented method for cushioning soles and using it in its running, basketball and tennis footwear lines. 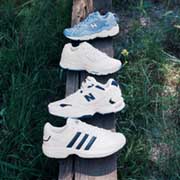 Nike and Adidas in patent fight

Nike filed a lawsuit in federal court in Lufkin, Texas, saying Adidas infringed Nike's "Shox'' cushioning technology, which is protected by 19 patents and took 16 years to develop, Nike said in a statement.

"It is deeply frustrating and inappropriate when companies borrow or refashion such technologies as their own without making similar investments,'' said Eric Sprunk, vice president of global footwear at Nike, in a statement, reports Bloomberg.

The SHOX technology was introduced in 2000 after the original Nike Air shoe debuted in 1979. The latest shoe to use the SHOX design is Nike's eighth Air Max running shoe, released last month at a suggested retail price of $160.

The latest version finally eliminates foam from the midsole of a shoe that relies on air cushioning in a design first suggested to Nike by aerospace engineer Rudy Frank. The goal was to create a shoe with lighter, more durable cushioning than foam.