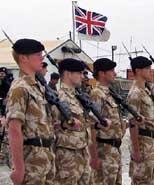 Wrapping up a three-day visit to Lebanon, Mottaki said Iran supported the "current political process in Iraq," but he urged the incoming government to control the "escalating terrorism" targeting Iraqi civilians and to push for an immediate pullout of U.S.-led multinational forces.

"We believe that the presence of the British forces in Basra has destabilized security in this city and has had some negative effects in the form of threats against southern Iran recently," Mottaki said.

Basra is about 35 kilometers (22 miles) from a southern Iranian province that witnessed riots and bombings last year allegedly connected to Iran's Arab minority.

"The Islamic Republic of Iran demands an immediate withdrawal of British forces from Basra," Mottaki told reporters after talks with his Lebanese counterpart.

British Prime Minister Tony Blair, who was visiting Germany, told reporters in Berlin: "What I would say to the Iranians is that there is no point in trying to divert attention from the issues to do with Iran by calling into question the British presence in Iraq, which is there with a U.N. mandate and Iraqi support."

Mottaki's allegations seemed to be spurred by the recent publicity given to a video of what appeared to be British soldiers assaulting young Iraqi boys after a street confrontation in January 2004 in the southern Iraqi city of Amarah, about 100 miles north of Basra. The British army has launched an investigation and arrested two individuals.

Mottaki said British forces had behaved in an "inhuman and immoral manner that constituted a flagrant violation of human rights" against young Iraqis.

Previously Iran has accused Britain of involvement in the bombings and riots in Ahvaz, the capital of oil-rich Khuzestan province which lies across the border from southern Iraq.

Britain has denied any connection to the unrest. A militant group of Iranian Arabs claimed responsibility for two bomb blasts in Ahvaz.

During his visit to Lebanon, Mottaki held talks with President Emile Lahoud and Prime Minister Fuad Saniora and other senior officials.

"We have expressed our conviction that after Iraq's new government is formed by Ibrahim al-Jaafari, this government must act to deal with two issues very important for Iraq's future and fate: Iraqi security authorities must confront the escalating terrorism that targets innocent Iraqis daily and in a bloody way, and to put an immediate end to the American occupation of Iraqi territories," Mottaki said, reports AP.