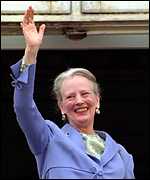 Denmark's Queen Margrethe will travel to Greece May 24-26 on an official visit, the royal palace said Friday.

Margrethe and her French-born husband, Prince Henrik, have been invited by Greek President Karolos Papoulias. Details of the visit were not immediately available.

The 65-year-old monarch, who attended the Athens Olympics in 2004 with other members of Denmark's royal family, is the older sister of Queen Anne-Marie.

At age 18, Anne-Marie married Greece's King Constantine, in 1964 in Athens. Constantine and Anne-Marie went into exile in London after the Greek monarchy was abolished a decade later, reports the AP.