Police said they seized about 8 metric tons (8.8 U.S. tons) of cocaine in an operation in southern Portugal on Friday the country's largest drug haul. Police also arrested seven Spaniards who allegedly belonged to an international smuggling ring during coordinated dawn raids in the Algarve coastal region. 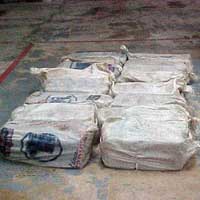 The cocaine was in 336 bales stored in a warehouse near the town of Silves , about 200 kilometers (120 miles) south of Lisbon . The haul had an estimated street value of Ђ 280 million (US$332 million), officials said.

The previous biggest haul was more than 6 metric tons (6.6 U.S. tons) tons seized last year near Lisbon . Portugal seized a record amount of illegal drugs last year, including a cocaine haul that represented one-fifth of the total apprehended in the entire European Union, police said in an annual report earlier this month.

Authorities say the Iberian peninsula is a major entry point into Europe for international smugglers who bring the drugs by sea. Smugglers are believed to take most of the cocaine and hashish by road to other European Union countries, reports the AP.