Prime Minister Jose Luis Rodriguez Zapatero was to meet with Spain 's Muslim leaders Wednesday to discuss the worldwide tension over the Prophet Muhammad cartoons. As protests, sometimes violent, against the drawings have swept the Muslim world, Spain has urged dialogue as the best way to reduce anger. Zapatero's meeting with Muslim leaders, however, was postponed from last week due to a visit by Russian President Vladimir Putin. 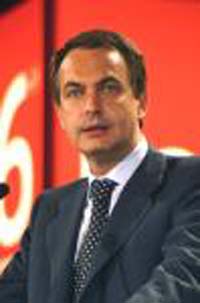 Zapatero was expected to hold the talks Wednesday afternoon at his Moncloa office. Felix Herrero, of the Spanish Federation of Islamic Religion Organizations, said he would tell Zapatero there was "a willingness for peace, justice and calm from the ordinary Muslim in Spain ," according to state-run news agency Efe.

The drawings, including one depicting the prophet wearing a turban shaped as a bomb were first published in September in a Danish newspaper, and have since been published by media worldwide, including in Spain . Islam widely holds that representations of Muhammad are banned for fear they could lead to idolatry, reports the AP.