Andrus Veerpalu defended his Olympic 15-kilometer classical title Friday to give Estonia its third gold medal of the Turin Games, all in cross country. Once his top competition had come in, Veerpalu raised his poles in triumph, then quickly took a big swig from his water jug. It was another day to celebrate by the Estonians at the Pragelato Plan, where Kristina Smigun won her second gold a day earlier in the women's 10km classical race. 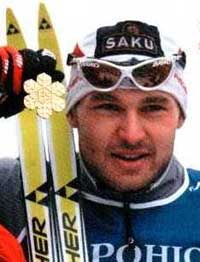 "We have three golds for Estonia ," Veerpalu said. "We are a very small country, so it's a great day for the country." Veerpalu finished in 38 minutes, 1.3 seconds to beat silver medalist Lukas Bauer of the Czech Republic by 14.5. Germany 's Tobias Angerer won his first individual Olympic medal by taking the bronze, 19.2 seconds back in an event skied in fresh snow.

Robel Teklemariam became the first Ethiopian to compete in a Winter Olympics, and the 31-year-old finished 84th. Teklemariam said he hopes to ski again in the next Olympics in Vancouver .

"I didn't know if I'd end up in the Olympics, but I definitely dreamed about it since I was 12," said Teklemariam, who now trains in Colorado after originally leaving his native country for New York .

The event features an interval start, with the best skiers going last in the 99-man field. It was a challenging day for wax technicians with snow falling overnight and throughout the race. Angerer, the World Cup leader, collapsed across the finish, but certainly had reason to be happy after a disappointing 12th-place finish in Sunday's 30km pursuit race. He had never won an individual medal at the Olympic or world championship level.

Frode Estil of Norway , a favorite in the event and the silver medalist in the Olympic pursuit race, finished 17th and seemed to struggle with his wax. Four skiers cleared in recent days to compete following five-day suspensions for high hemoglobin levels took part in the race: Teklemariam, Alen Abramovic of Croatia, Alexander Lasutkin of Belarus and France's Jean Marc Gaillard, re4ports the AP.