The Dalai Lama on Friday said "a little pressure" might be necessary to get the Islamic Hamas group to change its ways but suggested Israel and the international community establish unofficial contacts with the militants who swept Palestinian legislative elections. 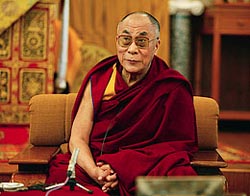 The exiled Tibetan spiritual leader suggested Palestinians voted for Hamas in Jan. 25 elections because they were "fed up" with their existing Fatah rulers. "I don't think that the majority of the Palestinian people prefer violence. I don't think," the Dalai Lama said during a five-day visit to the Holy Land .

"Sometimes a little pressure is necessary," he told a conference in Jerusalem sponsored by the Israel Democracy Institute, a think tank. That was an apparent reference to current efforts to force Hamas to renounce violence and recognize Israel as a pre-condition for receiving aid and doing business with Israel and the international community.

But the Dalai Lama also suggested that certain levels of government and private organizations reach out to Hamas "unofficially." "Various levels should explore, extend your hand, there's nothing to lose," he said.

In an earlier appearance in Jerusalem , the Dalai Lama urged Hamas to renounce violence and approach the situation "more realistically." China on Thursday criticized his visit to Israel , condemning it as a ploy to promote Tibetan independence.

"Everybody is clear on what kind of figure he is and everyone is well aware of the purpose of his visits around the world," Chinese Foreign Ministry spokesman Qin Gang said at a regular briefing. The Dalai Lama was not scheduled to meet any Israeli government officials during his visit. Though he is spending most of his time in Israel , on Sunday he will meet also with Palestinians in the West Bank city of Bethlehem .

The Dalai Lama fled to India in 1959 following an abortive uprising against Chinese rule and now heads a government-in-exile in the mountain town of Dharmsala in India . He won the Nobel Peace Prize in 1989. In the past decade, he has said that Tibet can remain part of China although he has been pushing for cultural autonomy so that Tibetans can preserve their unique Buddhist society, a position he reiterated while in Israel , reports the AP.