Russia will urge Hamas to acknowledge Israel's right to exist 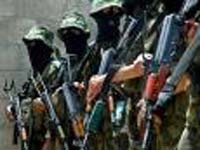 Russia will urge Hamas to acknowledge Israel's right to exist

"We want them to respect all previous agreements in order to prevent terrorist attacks," Kalugin said, according to Interfax. "Of course, it is also necessary to embark on the road toward recognition of Israel 's right to exist."

Putin on Thursday invited leaders of Hamas, the militant group responsible for dozens of suicide bombings in Israel , to visit Moscow . A Hamas leader quickly accepted the invitation.

Hamas won a surprise victory in Palestinian legislative elections last month and is expected to take power in two or three months. Putin did not say whether he would like Hamas leaders to visit before or after they form a government.

Russia is a member of the so-called Quartet of Mideast peace negotiators that also includes the United States , the United Nations and the European Union. The Quartet has been the main backer of the June 2003 "road map" peace plan, which called for the Palestinians to renounce violence and disarm militant groups like Hamas.

Kalugin said that in talks with Hamas , Russia "will help promote the principles agreed upon by the Quartet." "Everybody keeps telling Hamas members that they should take a balanced approach because such radical principles will not get them anywhere," he said. "We will suggest that Hamas change its position at a meeting with representatives from the group", reports the AP.