The outcome of U.N. negotiations on Kosovo's status will have a big impact on Albania as well as Serbia-Montenegro, and the problem needs to be resolved quickly, says Secretary of State Condoleezza Rice. 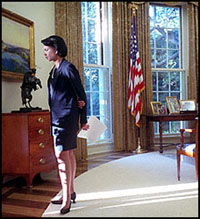 Rice discussed Kosovo's fate Thursday during a House of Representatives International Relations Committee hearing in response to comments by Rep. Dana Rohrbacher, who said American troops have been stationed there for too long.

Rice said the United States and European countries that have sent troops to Kosovo have maintained an "in together, out together" policy regarding deployments in the Serbian province.

In discussions with European Union colleagues, Rice said, "We all agreed that this is an issue that has got be resolved one way or another."

She noted that a U.N. negotiating effort is being led by former Finnish President Marti Ahtisaari. In addition, a new U.S. envoy, Frank Wisner, has been appointed with a mandate to "really now go out and take on this issue and see if we can get it resolved."