European Commission President Jose Manuel Barroso arrived in Kosovo for talks with U.N. and local officials, before the start of talks next week on the province's future. Barroso, together with the EU's enlargement official Olli Rehn, will meet with this disputed province's newly elected President Fatmir Sejdiu, Kosovo's negotiating team and senior U.N. officials. 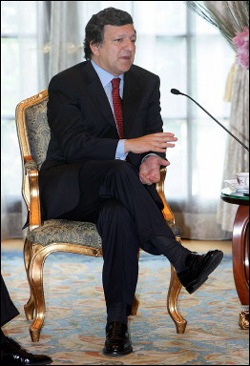 They will also meet with the province's Serb minority and the commander of the 17,500 strong NATO-led peacekeeping force. U.N.-mediated talks between Kosovo's and Serbia 's officials on the province's future begin on Monday in Vienna , Austria .

The EU is expected to take on an increasing role after the end of these talks. Preparations are already underway, in trying to determine the nature, the field and the scope of that involvement. Later in the day, Barroso and his team would head to the neighboring Macedonia , their third stop on a Balkan tour after Croatia and Belgrade , the capital of Serbia-Montenegro.

Barroso's tour, his first visit to the region since taking office in 2004, also includes trips to Albania and Bosnia . It was expected to bolster economic and political reform in the region, still struggling to recover from ethnic bloodletting in the 1990s wars, reports the AP.