This is why he pulled out of last year's world championships in his home country, rather than tear up a cranky groin muscle. This is why he had surgery after the season. Evgeny Plushenko had been waiting most of his life for this gold medal and last night at the Palavela, he grabbed it with both hands . 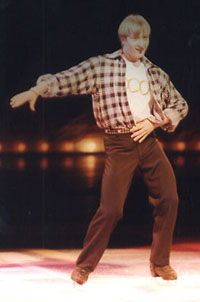 ''I said that I wanted to be an Olympic champion," exulted the three-time world titlist, after he'd blown away a flawed field by more than 27 points with a demanding long program to get the upgrade he craved after winning the silver behind countryman Alexei Yagudin in Salt Lake City four years ago. ''Now I have all the titles, and I'm really very happy."

As it turned out, Plushenko might have prevailed on one leg, just as he did at the world championships two years ago in Germany. Everybody else who'd been in medal contention after Tuesday's short program -- US champion Johnny Weir, Switzerland's Stephane Lambiel, France's Brian Joubert, and Japan's Daisuke Takahashi -- came apart like a cheap Halloween costume.

That put Canada's Jeffrey Buttle, who was sixth after the short, on the podium with a bronze behind Lambiel. ''It's unbelievable," said Buttle, last year's world runner-up who thought he was dead meat after the first night. ''I can't really feel yet that I've got a medal. I never would have thought I'd come back after the short program."

Neither did Evan Lysacek, who came out of the infirmary and up from 10th to finish fourth with a gutsy effort. ''I've dreamed the Olympic dream so many times, but not the outcome of the short program or being sick," said Lysacek, who came down with the stomach flu Tuesday night and needed to be rehydrated intravenously. ''Tonight was all about courage. The Olympics isn't about being perfect. It's about courage and putting yourself on the line."

Lysacek and the champion aside -- and Plushenko was so far aside from his rivals that he might as well have been skating in Sicily -- it may have been the worst collective night of men's skating in Olympic history. How bad was it? Lambiel, the world champion, finished fourth in the free skate and still ended up with the silver medal despite doubling his opening triple axel, putting hands down on his quadruple toe, and falling on his triple lutz combination, reports Boston Globe.