The men's short program didn't end until 11:28 last night, but Evgeny Plushenko's work was done by 7:21. 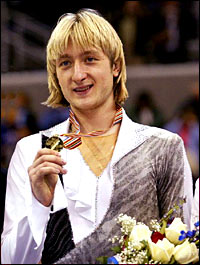 In roughly a minute inside the Palavela, he'd landed a quadruple toe-triple toe combination, a triple axel, and a triple lutz, more than enough to leave 29 rivals in his jetwash and put himself within reach of the Olympic figure skating title that eluded him four years ago.

''I just skated today perfect, clean, did my job today good," said the three-time world champion, after he'd run up more than a 10-point lead (90.66) on Johnny Weir (80.00) and defending world champion Stephane Lambiel of Switzerland (79.04). ''We will talk after free program."

Unless his bus takes the wrong turn tomorrow night and ends up in Slovenia, the 23-year-old Plushenko is odds-on to become the fourth straight Russian gold medalist, joining Alexei Urmanov, Ilia Kulik, and Alexei Yagudin.

''Maybe if it wasn't Plushenko . . .," mused Weir, who'll produce the best American finish since Paul Wylie in 1992 if he can maintain his place. ''I've been saying over and over, he's the one to beat. Look at his score in the short program. He made almost as much in one program as some people will in the whole competition. I'm not conceding. I'm just being realistic."

Plushenko, who won the silver in Salt Lake City after coming in favored, almost surely would have won his fourth global title on home ice in Moscow last year if a groin injury and other miseries hadn't forced him to withdraw before the long program.

But surgery, rest, and a prudent buildup have put him back in golden condition, as he proved last night.

''I'm very happy," Plushenko declared. ''I achieved a new personal best and I did it in the Olympic Games. This is very important to me. Everything was clean. But I don't want to talk so much right now. The real fight will be in the free skating," reports the AP.