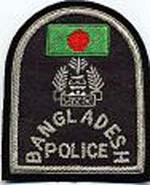 The clashes occurred in central Dhaka as about 500 opposition activists, many of them throwing stones at police, tried to overrun barbed-wire barricades and parade through the streets, witnesses said.

About a dozen protesters were detained during the clashes, opposition spokesman Sheikh Selim told The Associated Press. Police officials declined to comment.

Shops and schools across Bangladesh shut their doors to avoid trouble during the strike, which was called to protest price hikes and to urge the government to resign.

The nationwide dawn-to-dusk strike also disrupted public transportation in Dhaka and more than 60 other cities and towns, police and news reports said.

The shutdown was sponsored by the main opposition Awami League and 13 small allied parties. Such strikes get little public support, but most schools and shops close anyway, fearing intimidation and violence by strike supporters.

The opposition has launched a campaign of street protests and general strikes to press for the resignation of Prime Minister Khaleda Zia's four-party coalition government, accusing it of corruption, incompetence and authoritarianism, reports the AP.