Iran has resumed small-scale enrichment of uranium, a senior Iranian nuclear negotiator said Tuesday, showing the country was determined to proceed with its atomic development despite international moves to restrict it. The deputy secretary of the Supreme National Council, Javad Vaeidi, told reporters that enrichment of uranium resumed last week at Iran's main enrichment plant in Natanz. 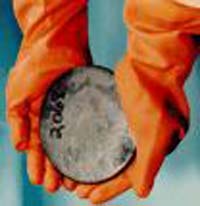 Asked if Iran had resumed large-scale enrichment, as required for producing fuel for nuclear reactors, Vaeidi replied: "No." "We need time to have 60,000 centrifuges," he said, referring to the devices used in the enrichment process.

Diplomats in Vienna, Austria, the site of the U.N. nuclear agency, had said Monday that Iran had started small-scale enrichment of uranium, a process that can produce fuel for an atomic bomb. The world has long sought to stop Iran from enriching uranium, fearing that the process would bring it to the threshhold of possessing nuclear bombs. On Feb. 4, the International Atomic Energy Agency reported Iran to the U.N. Security Council and simultaneously called on its government to suspend all enrichment-related activities.

Instead, the Iranian government decided to suspend certain aspects of its co-operation with the IAEA and steam ahead with enrichment. "According to the presidential order (last week), and to the law passed by the parliament (last year), the order of resumption of uranium enrichment was issued," Vaeidi told the press conference, reports the AP.