The authorities of the Democratic People's Republic of Korea (North Korea) started disassembling key facilities at Sohae's range ground in the west of the country, not far from the border with China. The DPRK had used the range ground for launching intercontinental ballistic missiles. 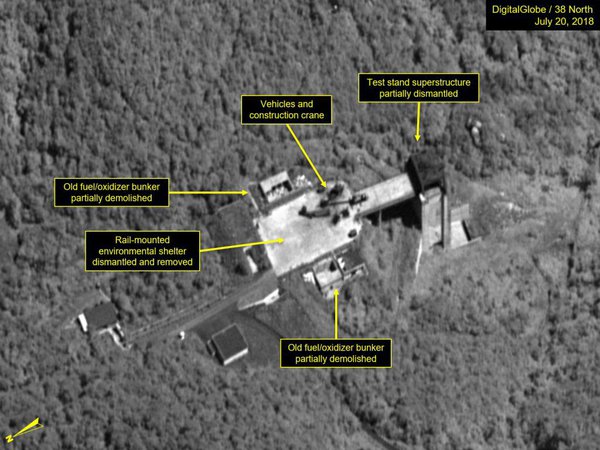 US specialists, having analyzed new satellite images, concluded that the North Koreans started demolishing a production building and a test rig for rocket engines. The rail-mounted transfer-processing structure had been partially dismantled by July 22, a caption to one of the photos says.

South Korea welcomed the information about the process to dismantle key facilities at Sohae launch site. "This is likely to have a positive effect on the denuclearization problem. This is better than nothing, I believe that the North is moving towards denuclearization step by step," a senior official at the administration of the South Korean president said.

DPRK leader Kim Jong-un promised US President Donald Tramp to destroy the Sohae range during their historical meeting in Singapore on June 12.

The Sohae test site, also referred to as the satellite launching station, is situated 200 km north-west of Pyongyang and 70 km west of the large nuclear center in Yongbyon. The Sohae site was used to test the Hwasong-15 intercontinental missile, which, according to North Korean officials, was capable of carrying an extra-large nuclear warhead.