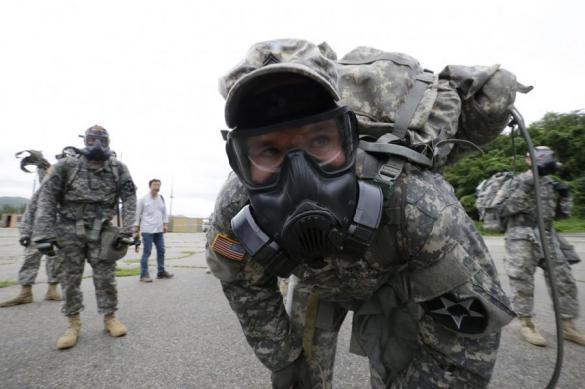 "Russia's reckless intervention in Syria and support for the Assad regime has raised the risk of confrontation with the West. The failed attack on U.S. forces by Russian mercenaries recently in Syria was one sobering example of this behavior; Moscow's aggressive rhetoric in the period leading up to and after the recent U.S. - led strikes is another," his testimony reads.

Mitchell added that Washington did not seek a confrontation with Moscow in Syria, but admitted that the US was ready to use force if necessary. "We do not seek a confrontation. But our forces will not hesitate to use necessary and proportionate force to defend themselves as they are in engaged in operations to defeat ISIS and degrade al-Qa'ida," he wrote.

Mitchell also said that the conflict in Syria can only be resolved through negotiations in Geneva. "This solution can only be achieved through a UN - led Geneva process to fully implement UNSCR 2254. We are pushing Russia to be a constructive participant in this process and to bring Assad to the negotiating table. So far, Russia has ignored these calls and instead been a spoiler to Geneva," west Mitchel believes.

Meanwhile, the Security Service of Ukraine published a video of the interrogation of a man who claimed that he had witnessed the transportation of a group of people without identification signs to Syria on board Russia's Varyag cruiser. Representatives of the Russian Defence Ministry said that the warship never visited the port of Tartus.

The Security Service of Ukraine alleges that the Varyag cruiser delivered a group of Russian mercenaries - employees of PMC Wagner - to Syria.

"Before telling these fables, they should consult the command of the Ukrainian Navy or their Western curators," official representative of the Ministry of Defence, Major-General Igor Konashenkov said.

The Varyag missile cruiser has never stopped by the port of Tartus in Syria, because there are no "appropriate berths" there for mooring warships of such displacement. Konashenkov also pointed out that a cruiser ship is not suitable for the transportation of military equipment and other large-sized military cargo. "The Varyag lacks suitable cargo holds," he explained.

The video from the Security Service of Ukraine shows the interrogation of the man who introduced himself as Nikolai Kovalenko. He served on the Varyag missile cruiser as a "space communications mechanic." He and a citizen of Ukraine tried to "illegally cross the border," where they were detained.