Sergei Skripal and his daughter Yulia were poisoned with a toxic chemical, a report from the OPCW said. 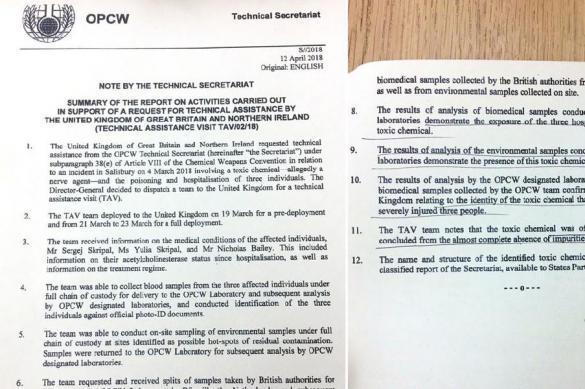 Source: The OPCW investigated the claims of the UK

Sky News, however, referred to the poison as "Novichok," even though the OPCW report does not call the substance so.

The OPCW report states that experts found particles of a toxic chemical in samples taken from the site, where the Skripals were poisoned in Salisbury. The poison was also found in blood samples of Sergei and Yulia Skripal.

Earlier, the Daily Mail reported with reference to the British Foreign Office that experts completed the investigation into the Salisbury incident and handed over the report of the United Kingdom. Thus, the OPCW confirmed the version of the British side.

The OPCW report states that the chemical the toxic substance was of high purity and contained almost no impurities. British Foreign Secretary Boris Johnson called the OPCW report "convincing."

"Today the international chemical weapons watchdog have confirmed the findings of the United Kingdom relating to the identity of the toxic chemical used in the attempted assassination of Mr Skripal and his daughter, and which also resulted in the hospitalisation of a British police officer. That was a military grade nerve agent - a Novichok," UK Foreign Secretary Boris Johnson," he said.